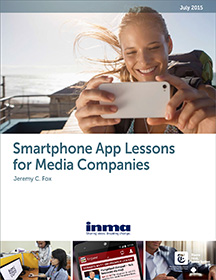 The trials, tribulations, and aspirations of media companies trying to make smartphone apps work for its most loyal readers is the focus of “Smartphone App Lessons for Media Companies.”


Who should read the report:

Senior media company executives who need an overview of smartphone app development and practitioners aiming to benchmark their efforts vs. peers.

* Free to INMA members whose memberships were active on July 27, 2015

Smartphone apps have become the No. 1 platform for media companies to deliver value to its most engaged and loyal readers. Yet the money is slow in developing.

“Smartphone App Lessons for Media Companies” takes you behind the scenes at media companies on five continents on the challenges and thought processes surrounding smartphone apps.

The report's value is less in the smartphone app results than the discussion, debate, and struggles to fit smartphone apps into a media company's bigger digital strategy. The results are uneven across companies.

“The smartphone app report injects INMA members into the heart of discussions at peer media companies,” said Earl J. Wilkinson, executive director and CEO of INMA. “What you come away with are ideas, benchmarks, goals, and a lot of new material to bring into strategic discussions. With so many apps being developed the past three years, it's illustrative to see the ideas that are surviving.”

By the report's conclusion, the contours of the discussion are clear. The nuances have been coloured in.