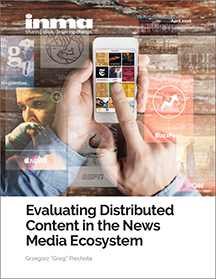 The rapid rise of mobile and social networks has spawned a mad rush by media companies to distribute content on platforms other than their own, yet whether to distribute and where to distribute depend on the publisher's objectives and context.

Key themes in the report:


Who should read the report:

* Free to INMA members whose memberships were active on April 28, 2016

As a 2016 Nieman Fellow at Harvard University, Grzegorz Piechota explores the transformation of the media business and the future of work in creative industries while working on a vision of the future news ecosystem.

Piechota is a former news editor of Poland's Gazeta Wyborcza. A law school graduate, he began his career at Gazeta Wyborcza in 1996 as a reporter at the tiniest provincial office, rising to head of its multi-media newsroom and vice president of Agora Foundation.

Before coming to the United States, Piechota was responsible for new product development at Gazeta Wyborcza and lectured on digital innovation and social change in Belarus, Russia, and Ukraine.

He is a member of the INMA Board of Directors and a past president of INMA's Europe Division.

The rapid rise of mobile and social networks has spawned a mad rush by media companies to distribute content on platforms other than their own, yet whether to distribute and where to distribute depend on the publisher's objectives and context, according to a new report by INMA.

Yet building on his extensive understanding of the media ecosystem, Piechota urges publishers to ask what their end games are with partnerships as well as their platform strategies — and further layer on top of strengths, weaknesses, opportunities, and threats. The report includes several matrixes that allow publishers to make these evaluations.

In the end, Piechota is clear-eyed about the “frenemies” facing news publishers. He holds out as the best risk/reward ratio as Google's AMP as an open industry standard. Axel Springer's Upday and Apple News are aggregator apps that are low risk yet also low reward. And he is intrigued by platforms' host initiatives like Facebook Instant Articles, Snapchat Discover, and Twitter Moments for their high rewards — yet cautious about high-risk investments.